The Church of All Saints, Gresford, is among the finest parish churches in Wales and its numerous medieval furnishings include the font, screens, misericords, ceiling and the finest collection of medieval stained glass in Wales. 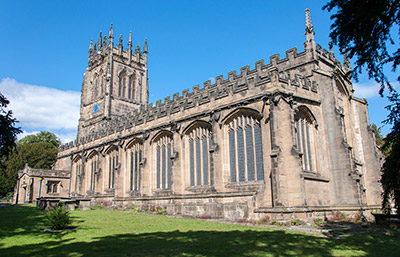 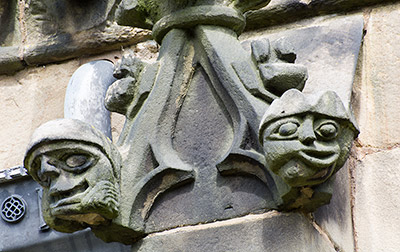 Numerous stone carvings around the exterior of the church form a remarkable menagerie of grotesque heads, figures and beasts on the stops of the window hoodmoulds and along an upper string course, which is also punctuated by gargoyles. Further heads are found on the buttresses and tower, where large figures were completed in the sixteenth century.

The meaning of these grotesque carvings is not clear to us now. Perhaps they were to intended to frighten away evil spirits from the church, or represented the evil spirits that were believed to tempt and bring about the damnation of the soul. Some have thought that they represent the vestige of Pagan beliefs that had become incorporated into popular Christianity of the Middle Ages. Their presence on the outside is in clear contrast to the angels depicted around the ceiling of the interior of the church, signifying the sanctity of the church.

Today their spiritual power has been replaced by their curiosity: remnants of a medieval belief system that is too far away from our modern sensibilities. They have lost their colour and do not attract our attention as they once would have done. These images attempt to draw our attention to these remarkable carvings once again.

Prints of the images were first shown at my PhD exhibtion at Oriel Q, Narberth, in 2014. Their titles include references to their position around the walls of the church. A limited-edition booklet including all of the images and many photographs is available on the Sulien Books site.