The field of stained glass has been a central part of my research since around 2006. Although medieval and Renaissance stained glass has often been of interest to art historians, nineteenth- and twentieth-century stained glass has received far less attention, despite the many attractive qualities of Victorian, Arts & Crafts and more modernist stained glass.

Initially, this was simply a case of recording stained glass, and led to the publication of the online ‘Stained Glass in Wales’ catalogue, launched in 2011. Much more fieldwork and research into archive sources was required in order to produce my Stained Glass from Welsh Churches, which I also designed, and was published in June 2014 by Y Lolfa.

Awarding the book the Mrs Foster Watson Memorial Gift, presented every five years for published work that combines scholarship with general interest, the assessors commented: 'It is a substantial work of pioneering scholarship, spanning the centuries. At the same time it explains the development of this specialist art-form and craft in terms that the wider audience of cultured readers will understand. It thus fits perfectly the criteria set for the competition and fully deserves the award'.

My photography of the hundreds of stained glass windows included in the book was also widely commended in reviews, and the editor of the British Art Journal suggested that it ‘may well be the most beautiful book ever on stained glass.’ According to Thomas Lloyd, Welsh Herald and architectural historian, the book is 'a revelation, revealing unexpected art treasures of British importance and setting a new standard in research and presentation, the author being a superb professional photographer.’ Reviewing my book Depicting St David (2020) in the Newsletter of the Ancient Monuments Society/Friends of Friendless Churches, Matthew Saunders writes of my 'skill set [which] positively encourages the production of beautiful and authoritative books'. 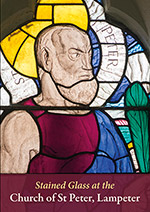 In addition to Stained Glass from Welsh Churches, I have also written and produced smaller books as studies of the stained glass of individual churches, published by my imprint Sulien Books, which was partly established for this purpose. I have been recognised as the leading authority on the historic stained glass of Wales, and serve as an advisor on stained glass to the Diocese of Llandaff, as well as being a member of the Stained Glass Committee of the Church of England Church Buildings Council.

Work recording stained glass in churches in Wales is ongoing, and in addition to a photographic archive of stained glass from around 800 churches in Wales, I have also been gathering an archive of images and notes on stained glass at many more churches, and other kinds of buildings. Unfortunately, only a little more than half of all this material is currently catalogued and available on the 'Stained Glass in Wales' catalogue, as the cataologue has not had any significant funding since 2011. My thanks are due to the Glaziers Trust, the Kempe Society and the Gibbs Trust that have funded additions to the site in recent years. For more information about the site and recent work, see this blog post (December 2020).

I have also been turning my attention to the possibility of developing the catalogue in other parts of England, although ambitious plans to develop and co-ordinate the recording and cataloguing of stained glass in England have had to be shelved with the failure of several modest funding bids submitted in 2019. I am continuing to consider ways in which this can be achieved. Although most of my writing and research on stained glass has been focussed on Wales, some of my recent articles have considered the subject more broadly across other parts of Britain.