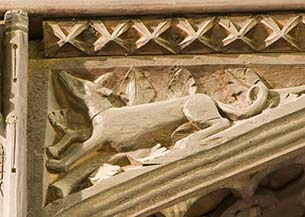 Surviving medieval figures and scenes have rightly attracted art historical interest, while the decorative art that surrounds them has been less well-studied. Comprising patterned designs and incidental details such as heads, animals and fantastical beasts, this wood and stone carving was often brightly painted in its original state, although today it is usually encountered in its bare natural colour.

This figurative detail and abstract design was created by wood and stone carvers, glaziers, and the designers of ceramic tiles. Its meaning is not immediately obvious to us now, but would have been understood within the context of the mysteries of the Christian faith in the Middle Ages. Often the original focus of the shrines and altars in medieval churches – the statues and scenes from the Bible or lives of the saints – have been disfigured and lost, but their decorative surrounds have survived, occasionally with traces of colour.

Many of the sources of patronage that allowed the visual arts to flourish in the church were lost after the Reformation in the sixteenth century, but the decorative arts continued in the form of wood panelling and carving on tombs in the seventeenth and eighteenth century. It enjoyed revival in the nineteenth century when hundreds of churches were built and restored, when architects and designers looked to the Middle Ages for inspiration.